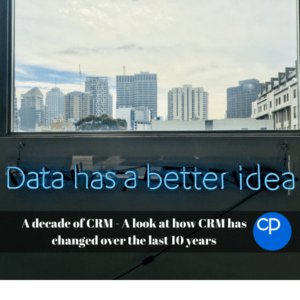 Nostalgia isn’t what it used to be! The beginning of a new decade feels like the right time for a look back at what has happened to CRM in the teenies.

Like any teenager, this was never going to be an easy period of development. The preceding decade has seen the birth of modern CRM systems. The parents (contact management and sales force automation) were proud of the youngster. But then came the tricky teenage years. The awkward times when things change. So what were the highs, and the lows of the journey to maturity?

Incredible as it may seem, in 2010 SaaS was still the exception rather than the norm. Many clients were installing CRM software and synchronising databases to field sales reps who carried laptops. These days the laptop has given way to the mobile, and it’s always on connection to a CRM system in the cloud that is bang up to date with the very latest software.

Inbound marketing was the trend that powered the decade for marketing departments. In 2011 companies like Hubspot and Marketo were too busy evangelising to develop their own CRM tools – so integration was the order of the day. Even today their tools work best with more mature CRM platforms than the inbuilt contact management tools.

This was the year that mobile came to the fore in CRM. Not just accessing a standard application through your phone, real mobile CRM comes in the form of Purpose Built Applications. Tools that are as simple to use as any App store favourite.

In the constant drive to improve the data within CRM systems the customer portal is emerging as a key element. Why not get the customer to update and clean their own data? The issue many early adopters struggled with was developing reasons why the user would bother? Those that persevered were significantly ahead of the pack when the GDPR regulations came into our collective consciousness in 2018.

As the spend and focus on Inbound marketing was beginning to slow, vendors worked out that you could use the same tools to drive account development and retention. New tools to the marketing communications technology stack focused on Account Based Marketing kicking how we communicate with each other up another notch.

As CRM systems have extended their reach and scope, so the need for new ways to understand and interact with the data has grown. Increasingly this means dashboards and alerts. The surfacing of relevant data in easy to consume ways increasingly drives the demonstration of CRM software by vendors – conveniently missing the need for someone to enter the data in the first place.

As if to answer the challenges associated with users’ not entering data into CRM systems – data augmentation emerges from the Gartner Hype cycle. The biggest move in this area was Microsoft’s acquisition of LinkedIn. A move that brought together the trend for data subjects to update their data, and the integration of that data into the CRM system.

Application Programming Interfaces have always been a part of the IT landscape. Increasingly, with the need to consume data from multiple sources that enhances your view of the customer APIs have become a key selling point for CRM platforms. Now all you need is the kind of developer who can understand and use and API to move data between systems.

After numerous false starts finally AI started to show its potential. The best examples returned to the enduring theme of making it easier for users to interact with the CRM system. Using AI to integrate voice control and provide suggested next actions is still in its infancy but for users who grew up with Alexa and Google expect nothing less.

Top CRM trend – Low Code / No Code – Everyone a developer

The decade ends with a recognition that one of the biggest limitations to the adoption of much of the new technology around CRM has been the shortage of developers to align functionality with user requirements. In our experience the majority of companies currently operate a cloud based CRM system, but are struggling to get the promised productivity benefits. Low code and No code development allows organisations to unblock the backlog of enhancements users are demanding.

The next decade will no doubt introduce more new and exciting functionality to further cement CRM at the core of how organisations Acquire Develop and Retain long term profitable relationships with their customers. If the teenies were about capturing data – let’s hope that the twenties do more to empower users and customers in ways that allow for deeper and more profitable relationships.

The CRM Insights Blog from Collier Pickard covers topics on all aspects of CRM written by our team of in-house CRM experts.

Collier Pickard has been trading since 2004. The core team, however, has been together for more than 20 years – which means we have a great deal of experience as an independent CRM consultancy.

t: +44 (0)1959 560410
We use cookies to ensure that we give you the best experience on our website. If you continue to use this site we will assume that you are happy with it.Okread more