What is the best strategy for Data Migration? 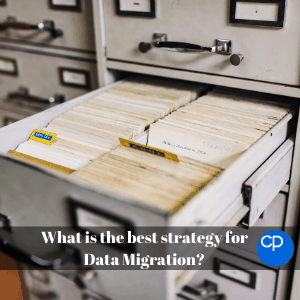 New Year, new CRM system? For many organisations considering changing CRM platform, data migration is a major worry. How much, and what sort of data should you move? What is the process for moving data, and how do you ensure that the new CRM system doesn’t start life with the same messy data as the old one?

Here at Collier Pickard, virtually every CRM system we have implemented has included an element of data migration. It is highly unusual that anyone wants a CRM system that does not have any data in it. Whether it is existing customers, or prospects, or historical data that helps build a better understanding of the markets; good clean data puts the value into CRM systems.

Not too much, and not too little, but just enough. The most common mistake that companies make is migrating too much data. Indeed in 15 years of helping our clients implement CRM systems I cannot recall a single time when not enough data was an issue. All too often the issue is that a lot of old data that doesn’t add any value to the system is imported because “someone” thinks it might be useful. If you are struggling to deal with a stakeholder who is insisting on bringing in years of old data then be resolute and push back hard!

So how do you identify the Goldilocks data?

Even when you have identified the data to migrate, and the processing you will perform to ensure that only very best quality data appears in your new system, there is a further stage to consider.

What is the go-live plan for your new CRM system? If you are undertaking testing and training before go-live then you may need to run the migration multiple times. If your implementation project demands any sort of parallel running then you need include that in your process.

If despite all of the points above about reducing the volume of data to be migrated, this may necessitate a phased approach to the migration as users are cut over, or as data is merged / perfected and uploaded to your new CRM. All of which requires time and thought.

Let me leave you with these top tips:

The CRM Insights Blog from Collier Pickard covers topics on all aspects of CRM written by our team of in-house CRM experts.

Collier Pickard has been trading since 2004. The core team, however, has been together for more than 20 years – which means we have a great deal of experience as an independent CRM consultancy.

t: +44 (0)1959 560410
We use cookies to ensure that we give you the best experience on our website. If you continue to use this site we will assume that you are happy with it.Okread more