Hilco Capital was founded in 2000 by Paul McGowan in partnership with Hilco Global in the US, the global leader in distressed investment and advisory services. Having been involved in many of the most notable retail restructuring projects of the last 14 years in the UK, Hilco Capital has progressively expanded into the stressed investment sector, making its first investments in the manufacturing and industrial sectors in 2009. In 2013, Hilco gained wider public recognition with the acquisition of HMV out of administration.

While some organisations sought to “batten down the hatches” and ride out the recession, for Hilco this was not an option. With an increasingly turbulent economy, their advice and services were in demand from shareholders, lenders and business managers. Their challenge was to identify and win deals that were an ideal fit in terms of size and potential. 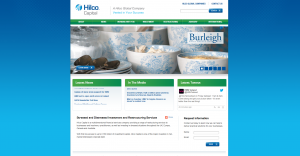 In a period where your services are in demand, and where your reputation means you are seen as the market leader, it might be tempting to just take everything and bank the cash. Typically, Hilco eschewed such short termism, and instead thought about building for the future. Rather than becoming a pure consultancy they recognised the need to provide more than just expertise. By taking equity stakes in businesses they could deliver improved returns to their own shareholders.

The US company had invested in a CRM platform based on the multi award winning SalesLogix CRM. For a while the UK team considered implementing the same platform. It was only after a review of requirements that this was rejected. What IT Manager Rolf Cockerill recognised was that the European market differed from the North American one in several key areas.

Notably Hilco identified the need to build an intelligence database that would help them to target companies before they were in crises. Whilst the structure of the database would be fairly simple to create, acquiring the data to fill it would prove to be a much larger challenge. The data could only come from the Hilco Capital team of Investment Directors. These are the experts that set Hilco apart from their competitors. They are typically industry experts with their own networks of business contacts. Getting these individuals to trust their “network” to the CRM system was a major challenge.

“My experience told me that the software and the supplier I selected would have to be able to work with us.”

Having identified the key areas of functionality required of the new CRM system, Rolf Cockerill researched the market. His initial internet searches identified Kent based independent CRM consultancy Collier Pickard as a potential supplier. In addition to expertise in SalesLogix (the system used in the US) they had a refreshing approach to addressing his needs.

Rolf explains “If you were to believe everything you read on CRM suppliers’ web sites, then CRM is a walk in the park. My experience told me that the software and the supplier I selected would have to be able to work with us. They would need to be able to respond quickly, and to demonstrate a “can do” attitude.”

To cut through the marketing hype Rolf constructed a scenario for potential suppliers to demonstrate a solution for. In each case the supplier was required to import data and provide tools to assist the user in updating the data. They also had to demonstrate how CRM could track the business health of a number of organisations, and how the reports used by the Investment Directors in their weekly conference call could be produced. Whilst none of his was beyond the capabilities of modern CRM software, Rolf was keen to see how the implementation partners worked with his users to deliver the solution.

The Collier Pickard team reviewed all of these requirements, and based on their knowledge of leading CRM software tools recommended Maximizer CRM from Maximizer Software Inc.

Collier Pickard Account Director Simon Pickard explains the reasoning behind the recommendation. “We had a matter of days to design and implement a solution. Whichever platform we chose could not be dependent on the availability of technical developers. The Business Analyst who specified the solution would have to build the system at the same time. When the initial build was complete we had to be able to hand over ongoing development to Hilco marketing and administration staff without programming skills.”

Development of the demonstration system was completed over 2 days.

The future of CRM at Hilco

After a powerful demonstration of the flexibility of Maximizer and Collier Pickard working together, Hilco duly awarded Collier Pickard the CRM project. Over the months that followed implementation of the system has developed in key directions. Users now regularly access their data from mobile devices whilst travelling. (Rolf speaks highly of the ease of changing from Blackberry to iPhones.) The system continues to provide the insight required to keep Hilco at the very top of their game. The CRM system is in used by teams working in Europe and Australia, and the range of services has grown to include property assignments.

The final thought about this special client of Collier Pickard must be that after 5 years of Hilco direct involvement, Canaccord Genuity have been appointed to advise on the sale of Denby Pottery. The move follows years of investment that has resulted in the growth of the business to a point where a number of unsolicited approaches had been received.

So just like CRM, investment and expertise has resulted in increased sales, and recognition of value created!

Here’s a copy of the case study as a PDF.

Explore our case study library and find out about just some of the many organisations that we have helped to deploy CRM.

Collier Pickard has been trading since 2004. The core team, however, has been together for more than 25 years – which means we have a great deal of experience as an independent CRM consultancy.