Churchill House is based in Ramsgate on the North Kent coast but is able to offer courses at 10 summer camps across the UK.
Students from around the world come to study in either classrooms or on home study courses. To ensure the quality of teaching, Churchill House is fully accredited by some of the language school industry’s most important governing bodies, including the Independent Schools Inspectorate (ISI) and the British Council.

In 2011, new Sales and Marketing director Greg Patton began a program to build on those strengths and increase the number of students choosing Churchill House to learn English. Whilst the choice of locations and the high quality teaching were valuable, Greg identified the need to professionalise the whole sales and marketing operation.

Changes in UK government rules regarding foreign language students and the recession in key European markets such as Spain and Italy meant that the pressure was on. With fewer students looking to study in the UK, changes were needed to quickly open new markets. It was also essential that sales leads were followed up professionally to improve conversion rates. With a background in Financial Services, Greg felt sure that a CRM system would help kick-start the changes required. 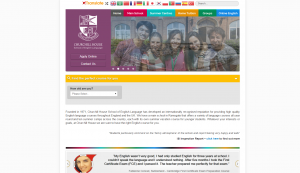 Despite a clear vision for CRM, the project almost faltered at the first step. Greg’s vision of business processes driven by a CRM system holding a 360 degree view of the client looked overly ambitious. Furthermore, in 2011 the recession in Europe was biting and student numbers were down. As a result, the management team were focussing all available resources on improving the quality of their product offering. They took the long term view that if they consistently delivered excellent results for their students, good news would spread, leading to a loyalty bonus in future bookings.

Not one to give up, Greg, and IT manager Pete Bevan, identified Kent-based CRM consultancy Collier Pickard as a potential partner. The challenge they set was to deliver a high quality CRM system at a low cost. What’s more, the CRM system had to be implemented in a matter of days and be ready for a busy selling period at the beginning of 2012. The team at Churchill House had the vision and the IT skills: all they needed was a partner to deliver CRM best practice and technical support.

Collier Pickard had worked with Churchill House before to implement an enquiry tracking system. This system had been superseded by the reservations system over time. Whilst this held details of Students, Courses and Accommodation, it did not have all the tools required to deliver Greg’s CRM vision.

The team at Collier Pickard were able to upgrade the old enquiry tracking system and re-engineer it to provide a full suite of CRM functionality. The CRM platform was Maximizer CRM from Maximizer Software.

Maximizer was the ideal tool as it provided very fast prototyping and deployment at a significantly lower cost than other CRM products. Within a matter of days, Maximzer had been configured to track enquiries from the web site or from overseas agents. Routines had been developed that took data from the reservations system into Maximizer, showing the contribution from each agent. Reports were created that sent agent performance reports to the agent at the touch of a button. Finally, the system had been populated with data from travel trade shows attended around the world.

In less than a week, the Churchill House sales team went from lists on bits of paper, to planned call lists and dashboards of upcoming requirements. The important tasks of agent communication, which used to take time to prepare and send, were driven by Maximizer. With the time saved, the sales team were able to develop their relationship with the agent and increase the number of student bookings. Equally important was the improved pipeline visibility that Greg used to manage seasonal fluctuations.

As a part of this focus on Agent relationship management the Churchill House sales team undertook gruelling tours of trade fairs around the world. Here they would meet new and existing agents and formalise their relationship. As a result Churchill House is now the first choice of language school for agents in locations as far apart as Chile and Taiwan. The European agents have responded well to the increased professionalism of the sales team at Churchill House. Bookings are once again on the increase.

The team at Churchill House have not stood still since Maximizer was implemented. The Sales and Marketing team continue to manage a growing network of agents around the world. The ability of the CRM database to handle private clients, has allowed the team to sell directly to students from territories without agent representation. It has been the ability of the CRM system to seamlessly scale that has given the team the confidence to actively seek to develop direct relationships with foreign students independent of agents. Increasingly students are forming long term relationships with language schools, returning as their career needs require. Progressing from basic through intermediate to advanced language skills. These relationships are tracked, and optimised, in Maximizer.

Early in 2014, buoyed by the success of deploying Maximizer to the sales and marketing team, Pete Bresser kicked off a project to move the Accommodation Quality database in to Maximizer. Once again the project was fast and furious. In less than 3 days, a complete database design and build was completed along with successful migration of data. By choosing Maximizer to host this important database, Pete has reduced the cost and complexity within the IT estate. He has also set the scene for inspectors to update reports using smartphones whilst on the road.

“Finding a partner who both understands our needs and works to win our business is important.”

Greg Patton said: “Relationships are at the core of our future as a business. Relationships with students, agents, host families, and each of these need careful management. We selected a tool and a partner to help deliver a CRM platform. Their belief that you implement fast and change over time has proven invaluable. It has saved us money, and kept us focused on our clients. So I would now add our relationship with Collier Pickard to that list.”

The final word has to go to Pete Bresser, the IT manager who introduced Greg to Coller Pickard. “IT management for an organisation the size of Churchill house is a challenge. Some IT providers don’t understand our needs, others are not interested in organisations of our size. Finding a partner who both understands our needs and works to win our business is important. Our Collier Pickard account manager works with us and for us – and that ultimately saves us money.”

Explore our case study library and find out about just some of the many organisations that we have helped to deploy CRM.

Collier Pickard has been trading since 2004. The core team, however, has been together for more than 25 years – which means we have a great deal of experience as an independent CRM consultancy.